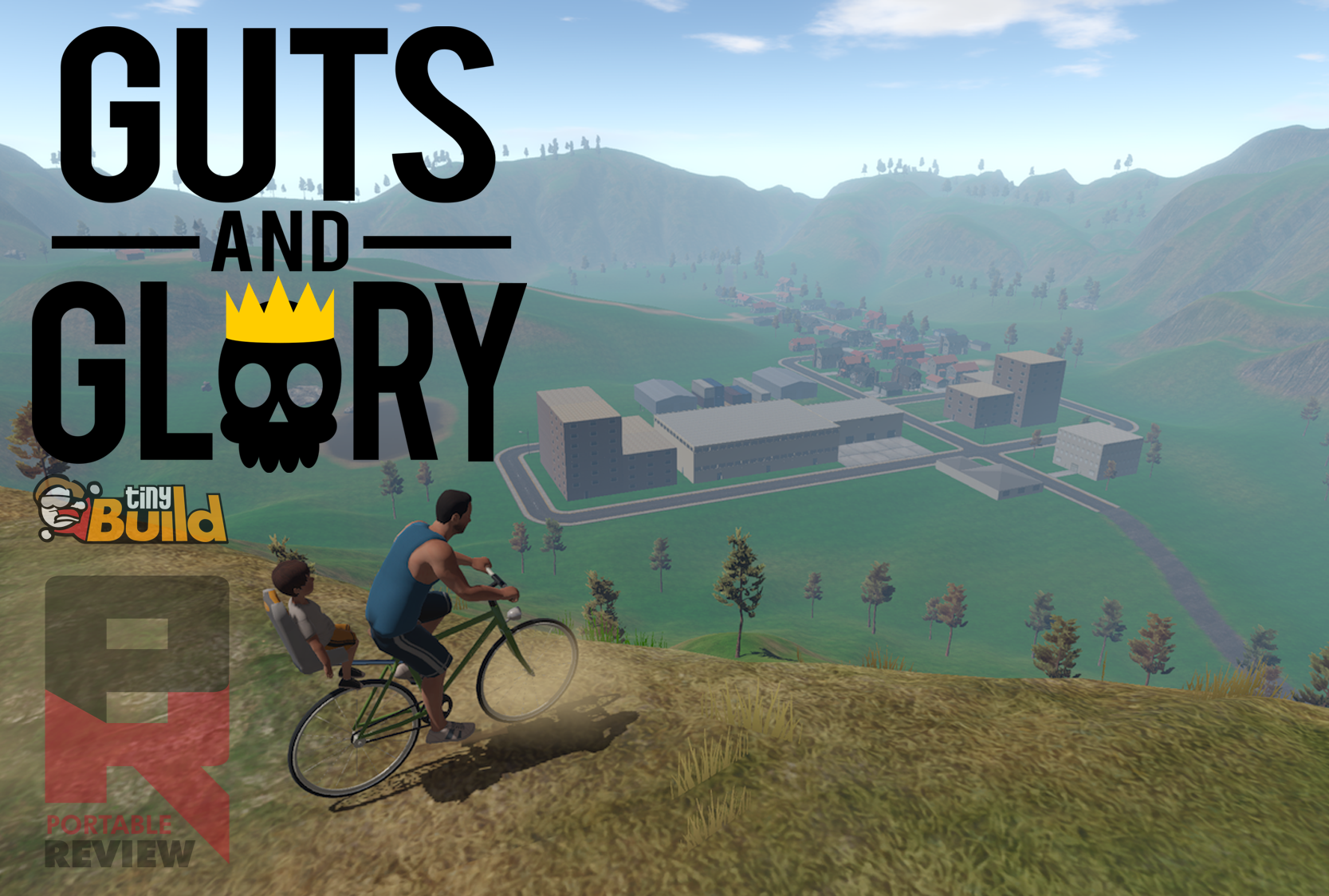 This game is…Odd, to say the least. I want to say that it is a bad game, yet at the same time I feel like that was the whole point to begin with. So in that sense, calling it “bad” accomplishes nothing. It isn’t bad in the “Let’s make some trash game that doesn’t work” sense. Guts and Glory just has this “cheap” air about it, like the developer got a hold of a budget physics program and started playing with it, and this game is the results of all of their demented mayhem (and ooooh, boy, is there demented mayhem here). There is some thinly veiled veneer of a “story” holding it all together, but really, the game is just the player character put into gruesomely random situations and trying not to die. From the moment you first set eyes upon the stiff, lifeless character models atop their bicycle on the title screen, you kind of have a feeling about what awaits you. However, the cheap aesthetic is all part of the total package. It highlights the absurdity of everything and makes it that much funnier somehow.

At the start of each level, you’re given a choice of character(s) to control, all of whom are incredibly simplistic/generic in their design but control vastly different from one another. Some character designs include: Man pedaling bicycle with Woman sitting behind him, Old man pedaling bicycle dragging wife behind him in a red wagon, Redneck driving an ATV, Stuntwoman on motorcycle, etc. You get the idea. They are super generic and almost seem like default NPCs from some random physics engine simulator program. Honestly, the other in game assets are in the same boat. Everything from the environments to the sounds is super generic and feels like the defaults of some other program. So after hearing this, you might be saying to yourself “Wow, that sounds kind of terrible and uninspired, how is this not a bad game?” The answer to that depends entirely on how entertained you are by random super-violence and carnage.

See, the “Story” of the game is that these daring characters have signed up for some sort of urban death match-obstacle course contest. Like a cross between Jackass and The Running Man, or something in between. You navigate your way through these banal environments avoiding spikes and crossbow arrows and landmines while you try to get to all of the checkpoints to clear the level. Should you fail, you will most likely be reduced to an exploded mass of failed-3d model giblets and blood. I say failed 3d model because once your body gibs, the game doesn’t even give a shit anymore and doesn’t even try to make any sense of your mangled mass. You become a mess of polygons and carnage spewing blood everywhere saying to yourself “Oh, I guess I died” then hit the respawn button. That’s pretty much it, that’s the flow of the game. Ride until you succeed or ride until you die and respawn.

Herein lays the biggest problem with the game (in my opinion). You will die OFTEN and therefore will be respawning your character often. Each time you hit that respawn button you’re going to be sitting there anywhere from 5-10 seconds while the level reloads. Seeing as how some courses are more unforgiving than others, you could die 3 seconds into your run which means you have to wait 5-10 seconds to respawn again. Depending on how badly the course has stumped you, you could be spending most of your “play” time watching the loading screen. This process becomes tedious and tends to sap all of the fun the carnage would normally have. If respawning was instantaneous or near it, then the game would have better flow, but sometimes the game feels the need to finish off whatever chain-reaction is resulting from your death and after you press the respawn button you’ll sit there at the black screen listening to the sound effects still resolve while you just wish you’d respawn already. Then you’ll probably die in the same way you did before because whatever theory you had for getting past something didn’t work, thus you have to listen to the same chain reaction again while waiting for a respawn. Thankfully many levels have checkpoints that save some of your progress in a level so you won’t have to do the entire thing over upon your certain death.

Again, you’re probably thinking to yourself “Why won’t he just call the game bad then? This doesn’t sound fun at all.” You have to have an appreciation for mayhem or you won’t enjoy this game at all. The crazy physics and over-the-top death situations (which are both graphic and not so graphic at the same time) are where most of the enjoyment factor in this game comes from. You’re not going to play this for story’s sake or even art’s sake. You’re playing this for laughs, or while otherwise inebriated. The random and unexpected things that happen in this game genuinely had me bursting out with laughter. The old man riding his bike and dragging his wife in a wagon behind him (Yeah they have a name, but it’s rather generic so the description is better than just me using their names) are absolutely hilarious, as she will almost always fall out of the cart 2-3 seconds into your run. Anybody who is riding a vehicle with you is just fodder honestly. The Man and woman sharing a bicycle faired the same way. Sometimes the woman would just act as a shield and absorb some arrows for the other and I would complete the level after she had fallen off (after saving me, of course). Other times, I would accidentally crash into a wall and explode into a pile of giblets for some reason, or slam into some mounted spikes gruesomely, or encounter a landmine accidentally, or carelessly ride into a spinning buzz saw. It’s all so grisly and unexpected, and THAT’s the appeal.

Guts and Glory is a mayhem simulator, and it follows the same “low budget” meme that other “simulator” games follow, it just doesn’t call itself such. I would not be at all surprised to learn the game was called “(Something) Simulator” during the development cycle, but ditched that last minute to avoid the stigmas that “genre” has received as of late. Nevertheless, you should expect simulator levels of ridiculousness from this game. The control’s, while not terrible, can be difficult to get the hang of sometimes, and will be the cause of many of your deaths. That said, the controls are not an insurmountable obstacle. It took me many tries to get the hang of the jet-pack, but surely enough I caught on and mastered it.

Really, your ability to succeed in this game hinges on two things: Your persistence and your appreciation for gory deaths. If you can simply shrug it off like “Lol, my guy got impaled on spikes again! Tenth time is a charm!” you probably have what it takes to conquer this game. If you can’t do that, then the novelty of ultra-violence will wear thin rather quickly. You may get a good laugh here and there, but you have to ask yourself is that enough for you to buy the game? All in all, Guts and Glory doubles down on spectacle, but that probably won’t result in a lasting experience for most players.