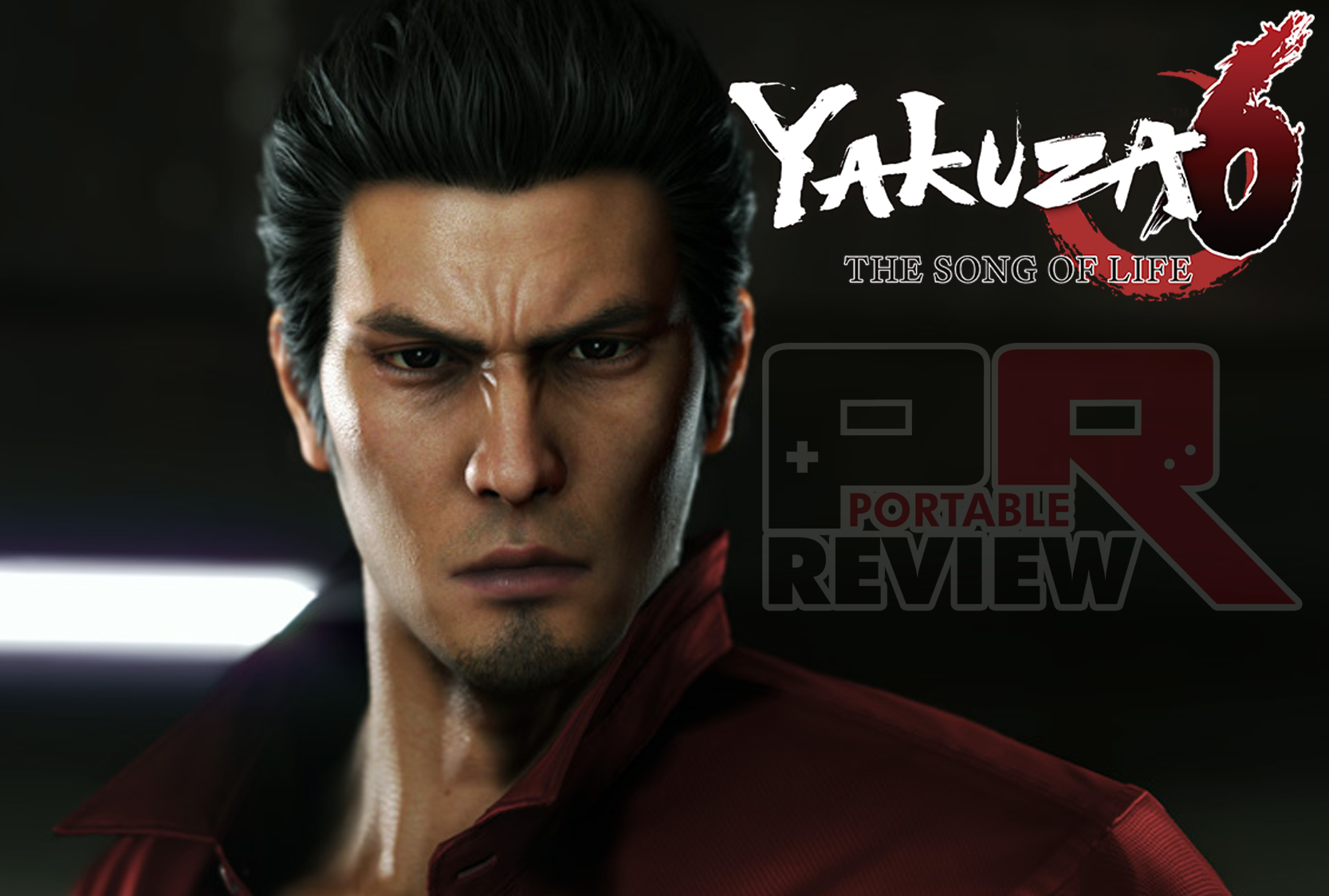 Yakuza 6, the latest entry in the long running series has officially made its way state side.  For me this is very special entry in the series as it concludes Kazuma Kiryu’s story arc.  Knowing this I took my time exploring the game and enjoying the story at a slow and steady pace.  With heavy investment into the sub stories and mini games I managed to clear the games story in about 50 hours.  How did Yakuza 6 fair?  Keep reading to find out!

If you are new to Yakuza, it must be said that the Yakuza series is very much a story driven franchise.  Although this is Kazuma’s last main series game, Yakuza 6 can most certainly be enjoyed as a standalone title.   The games story is self-contained and requires no prior knowledge from previous titles in the series.  Would I recommend that you play the series in chronological order, yes definitely!  Is it required to enjoy Yakuza 6?  Absolutely not.  Although, if you do have the time you may want to consider first playing Yakuza 0 or Yakuza Kiwami! before playing 6.  (For optimal story satisfaction play the whole series from 0 to 6) However, if you’re not in this for the story then by all means jump right in.

Continuing immediately after the events of Yakuza 5 Kazuma Kiryu finds himself back in prison doing time, voluntarily, in hope of clearing his name in order to protect his family.  Upon returning from jail, Kazuma learns that his adopted daughter, Haruka has gone missing.  With assistance from his old friend and ally Detective Date Kazuma learns that Haruka has been hospitalized after a hit run accident.   Rushing to her side Kazuma finds Haruka in a comatose state.   Adding to this Kazuma also learns that in his absence, Haruka has also conceived a child, Haruto.  Angered and confused Kazuma sets forth with baby Haruto to find answers.  Kazuma’s search leads him back into to the mean streets of Kamurocho and furthermore to the rural town of Onomichi.

The story that unfolds in Yakuza 6 is easily one of my favorites in the series.  The games narrative focuses on the values of family.  The story shows us, through various perspectives, the struggles parents face raising their children and the sacrifices they make to keep them from harm.  The subtitle, The Song of Life is very telling of this games story.

In-between Yakuza 6’s dramatic story players will be treated to fast passed open world beat-em-up action.  In Yakuza 6 Kazuma returns to being the only playable character.  His move list has been retooled and feels completely new and fresh in this installment.  The bulk of the gameplay revolves around beating up street punks to gain experience points to raise Kazuma’s stats.  In addition to beating down local ruffians Kazuma can also gain experience from playing mini games, completing sub stories, and even just eating food in the games various restaurants.  Although I enjoyed myself a great deal I felt that the new combat engine was little too simplistic.  Kazuma’s move pool is not nearly what it was in previous installments and can become a bit repetitive. In addition, the game seemed a little on the easier side this time around.  I played the game to completion on Normal mode but you do have the option to change the difficulty at any time.  Despite these minor complaints the combat in Yakuza 6 still remains fun and looks amazingly stylish in the newly developed Dragon Engine.

Being the first game developed exclusively for the PS4 Sega decided to up the ante and developed the new “Dragon Engine”.  The Dragon Engine allows for seamless transitions between action and story.  There are no longer load times between entering into combat or even the various buildings in the open world.  Going in and out of combat is buttery smooth now.  Also, Kazuma and his enemies interact with the game environment far more realistically now.  Enemies will stop dead in their tracks when slammed into environmental hazards.  While the Dragon Engine looks amazing and runs smooth I noticed that the physics engine can go crazy at times.  Sometimes enemies will look like noodley rag dolls when falling down, other times they seem weightless and will go flying for miles after a single punch.  It is quite entertaining when the physics go wild.  In addition to the wacky physics there is also bit of screen tearing when Kazuma moves around at high speeds.  Despite its flaws I commend Sega for creating something this ambitious. They could have easily just recycled the old engine from the previous game.  Nit picking aside Yakuza 6 looks and feels amazing.  Bravo Sega!

Complementing the games stunning graphical presentation is an equally impressive sound track.  The OST is riveting and will keep you pumped while cracking skulls.  The voice acting, once again, is helmed by a number real life Japanese actor’s including the infamous Takeshi Takano.  It should also be noted that all interactions, including those with NPC characters, now have full voice acting!  The sound design in the Yakuza series has always been of top quality and Yakuza 6 continues this trend.  I have no complaints on this front.

Ah yes, the real reason we all play the Yakuza series, the mini games.  In Yakuza 6 many of the series’ classic mini games make their return including Baseball, Darts, Hostess Clubs, and Karaoke.  In addition, players will be getting arcade perfect ports Virtua Fighter 5: Final Showdown and Puyo Puyo (BEANS!).  Some would argue a PS4 port of VF5 is worth the games purchase price alone.  There are also more in-depth side games including The Clan Creator, Spear Fishing, Managing the Warriors Baseball team, befriending locals in Snack Bar New Gaudi, and Troublr missions.  While all of these side games were quite entertaining, the one I spent most of my time on was the Clan Creator. In the clan creator you manage a small army in a Yakuza themed RTS game.  You can recruit new members via sub stories and through winning clan missions.  The clan creator also has its very own self-contained story featuring New Japan Pro Wrestling Stars including Kazuchika Okada, Yano Toru, and Tesuya Naito.  The Clan Creator even has its own online functionality for those looking for an extra challenge.

Overall, despite a few technical difficulties, Yakuza 6 is a damn fine game.  The combat is hard hitting and fast paced. The Dragon Engine makes for a silky-smooth gameplay experience.  The music and sound effects are stunning and the story is one of the best the series has to offer.  Yakuza 6 is definitely a title that you should at to your gaming library.

As I stated earlier this was a tough game for me to get through.  I can’t even believe I’ve been playing the Yakuza series for over 10 years now.  It feels like only yesterday I picked up the very first Yakuza game in bargain bin on a whim.  I went home popped in the PS2 and was immediately hooked.  After that for a few years it looked like we wouldn’t get any other games beyond Yakuza 3 but by some miracle (and signing many, many, petitions) we, the fans, managed to get every main series game released in the US.  What a ride it has been… Truthfully, I can’t think of another game series that has been more satisfying to play from beginning to end than Yakuza.  And although Yakuza 6 may not be the biggest or most spectacular entry in the series, it still proves to be one of immeasurable quality and relevance.

Even though this is the end of Kazuma Kiryu’s legend Sega has confirmed there are still more Yakuza titles on the horizon.  So, if you haven’t already do yourself a favor and please play these games.  I promise you won’t be disappointed.