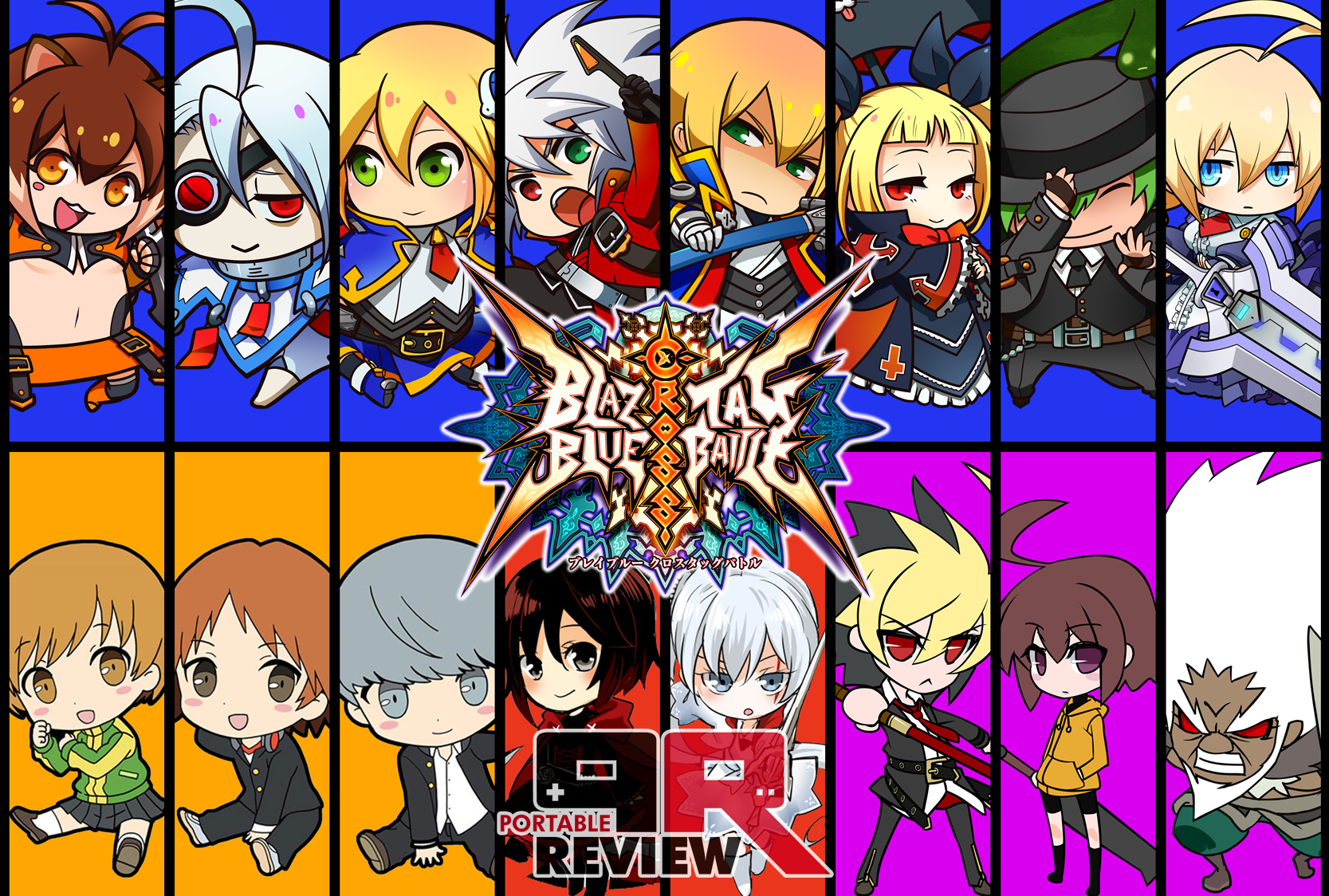 When I think of fighting games, I think of semi-complex motions, perfect timing, and a strong focus on competition. It’s you vs me in a battle to the death…or knock out. It’s a battle of wits and skill. In many fighting games, a good deal of skill is dedicated to being able to perform the previously mentioned semi-complex motions with perfect timing. In BlazBlue Cross Tag Battle (BBCTB), things are slightly different.

Fighting games have always struggled to hit the mainstream market in a meaningful way. Sure, most casual gamers know who Chun-Li, Kazuya, and Scorpion are, but most of you don’t really identify with Cerebella, Iori, or Sol Badguy. Much of the reason for this can be attributed to how difficult the genre can be to enter. I don’t just mean that it’s hard to master. For many people, the concept of a dragon punch motion is unfathomable. This makes doing even basic stuff difficult for a casual player. Because of this, many fighting game developers, including Arc Systems Works have been on a mission to make their games more accessible to new players.

A good number of gamers saw this first hand with Dragon Ball FighterZ, which added a universal control scheme that made it extremely easy to perform special moves, combos, and basically do what you want the game to do. BBCTC follows this trend with numerous auto-combos and a similar universal control scheme. All special moves are done by inputting a quarter circle forward or backward and a button. A very select few characters also have moves that are performed with a simple down, down + a button motion. All other functions in the game can be done by simply hitting two buttons together. Need to counter or anti-air? Two buttons. Need to throw an opponent? Two buttons. Need to dash or air dash? Again, it’s just two buttons. You’ve got this!

Generally speaking, I’m pretty terrible at 2D fighters, and only slightly above average at my go-to game, Tekken. I am close to the scene though, and have the benefit of being able to discuss things with my local competitive scene here. I know concepts and what to do, but sometimes I have difficulty doing them consistently. I can honestly say that I can hold my own in BBCTB, but there is still a skill ceiling here. The good thing is that it’s not the game’s fault if you can’t do something. Everything lies on you, the player, to know when and where to use meter, when and where to use an auto-combo, when and where to have your tag partner save you from getting wrecked by an incoming assault. The general consensus that I’ve seen from the fighting game community is that this game is not competitively viable, but I’m not sure how much of that is people thinking that simplifying controls is synonymous with bad fighters or if they’re speaking of its balance. Time will tell, but Mori Toshimichi has said that the focus for this game was more toward the casual fan.

With all of that out of the way, is the game even fun? Oh, man! Yes! I have spent hours in practice mode just messing with the combo system and how my tag partners work together. It’s so simple to do things, that it’s incredibly fun to try and figure out how to do more complicated things. On top of that, the characters are a mixed bag of weirdos. I say that in the most positive way possible. The Persona cast is fantastically optimistic, as always. The newcomers from RWBY are all enjoyable in their own ways, both in their dialog and in how they play. I found the In-Birth cast to be the most grounded, and I’m really intrigued with those games because of how they handled them here. As you might expect from a game with BlazBlue in the title, these characters make up the bulk of the roster. The cast here is a smartly chosen one, but I gotta say, there really seems to be a lot of scythe and rapier users in this game.

The story is one that, while enjoyable, is unfortunately repeated over and over again with each new group of characters. The premise is that some entity has transported a group of people from multiple worlds into a sort of pocket dimension for a tournament. Each group is given a crystal and told they need to protect it from those who would take it from them. The premise is simple, and works well the first time you run through it. The problem I found was that in each group’s story, they’re told to protect it, but in their story, they find out that the others were told something different. Had they made each story focus on a different goal, I think it would have been much more enjoyable. That said, there are some really good moments, and Ruby steals the show with her obsession of any kind of odd weaponry. I want to say that, while I played the game in English, I really did enjoy most of the voice acting presented in the game. Conversations sound semi-natural, and I can appreciate that.

I can’t say much of how online works as most of my time spent was in a very unpopulated early set of servers. What I can say is that even when I did experience lag, it rarely made me miss combos or was it the result of my losses. It seems that the game has a sort of buffer for combos, and even if you get a lag spike, you can still pull off things that would be impossible in another game. Much of this is probably due to the auto-combo system. I’m sure that if I had to press the assist button or had to hit Blake’s 5B at the exact moment that a lag spike occurred, it would result in a dropped combo.

Graphically, everything flows perfectly. I played the majority of the game on the Nintendo Switch and didn’t notice any dropped frames or hiccups. The character sprites are said to have clashed with one another, so most of them are reworked or entirely new. The result is actually a very pleasant aesthetic, although I believe they did reuse the backgrounds. A little side note, when starting a match, I did notice small hiccups in the background animations when skipping character introductions while playing on the Switch in handheld mode. Never really saw that while docked or playing on PS4. As with all “air-dashers”, this game is flashy. Every special move, every combo, every tag assist…they all strike awe in the viewer. Nobody ever said that Arc Systems didn’t know how to pull in an audience.

Lastly, I want to talk about the elephant in the room. The DLC. This game features a lot of DLC characters, and all but the RWBY characters (due to fan backlash) are paid add-ons. The game does come in at a lower price tag than the average triple A title, but that’s nothing new for Arc Systems. If you want all the additional characters, as they’re released, you can buy them in packs for $4.99 each or save a few bucks and buy the bundle pack for $19.99. The first DLC pack is free right now and features Blake, Kanji, Orie, and Platinum the Trinity. The final RWBY character will be added for free on June 19. There is a lot of discourse about these 11 characters being on-disk, but held back as paid add-ons. I get it; they’re nickle and diming us with these add-on content in fighters lately, but let’s face it, guys. As I said in the intro, Fighting games don’t make the big bank than games like Call of Duty and Madden pull in year after year, but they get way more attention to things like balance and catering to their fans. At some point, we have to decide if we’re willing to support the developers or if we would rather just let the genre die.

Like most BlazBlue games, presentation is top notch. I highly recommend giving this game a shot if you like the story modes of previous BlazBlue games, or just like messing around with your friends in fighting games. If you’re a casual fighting game fan looking to get into these games, this has one of the most acceptable points of entry in fighting games I’ve seen. I might even suggest that if you have always been held back by not being able to get your characters to do all the cool shit you see on streams, BBCTB is right up your alley.