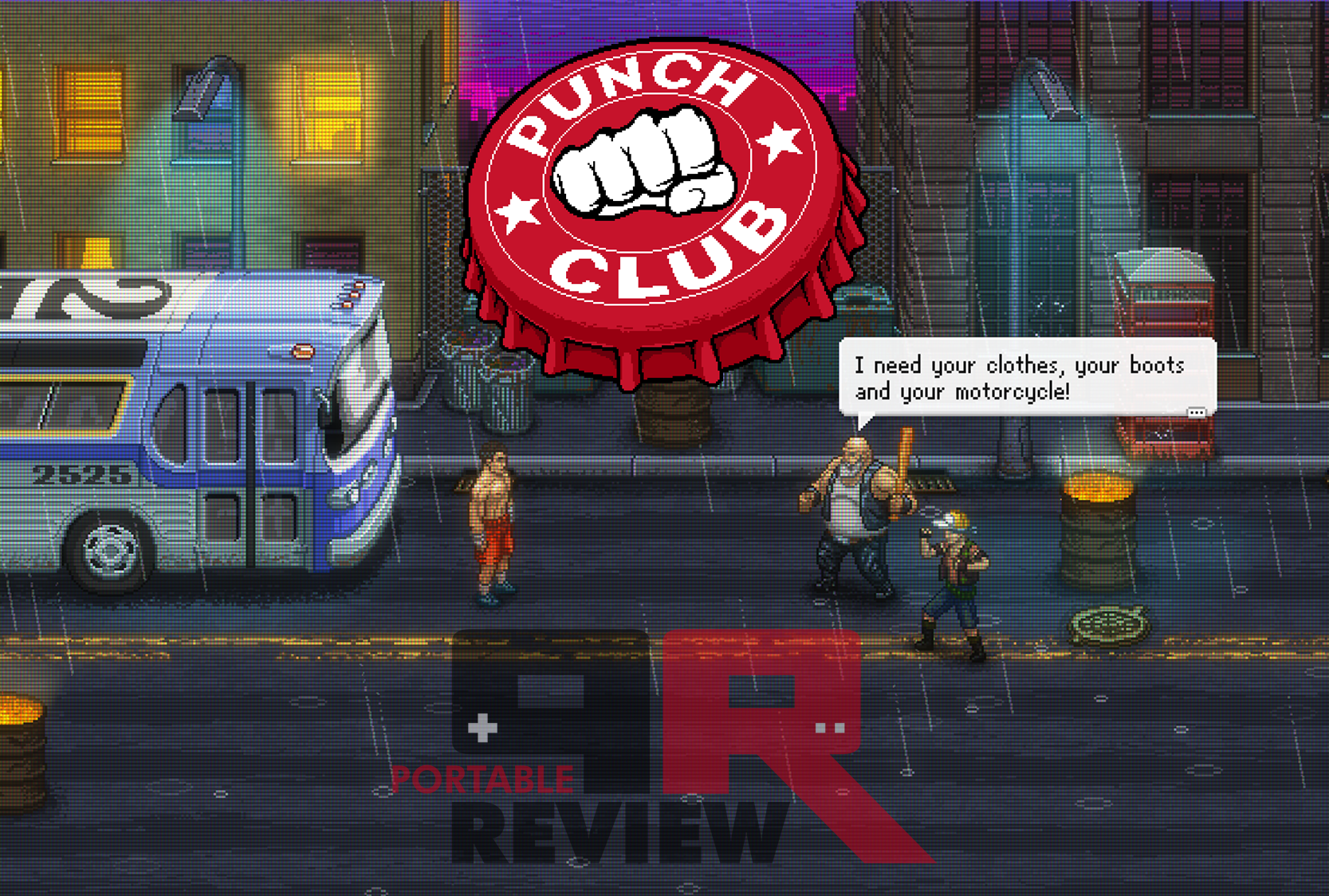 perhaps a more accurate title would be, “Get Punched Club.” Sometimes it’s even just “Get Clubbed.” However you want to call it, one thing is for sure…You will take far more punishment playing this game than you will deal out. This game is just brutal, that’s all there is to it.

So what exactly is Punch Club? Well, essentially it is a time/resource management game where you navigate a wannabe MMA fighter through his day to day dealings in the hopes you gain fortune and glory. What’s that now? You were expecting a game named Punch Club, featuring an aspiring MMA fighter to be an action game? Well, you’re sorely mistaken! If I had to place it, the game would be something like Jones In The Fast Lane with a bit of The Sims and a dash of Megaman Battlechip Challenge. You have very little control over the action, but about as much control over his life as your own.

The game starts with you as a child witnessing your MMA-fighter father gunned down by thugs in the street. With his dying breath he tells you to train and get stronger. So for like 20 years or so you apparently do nothing to train, until the game starts and you decide to finally go for it. You tackle the world with a whopping “1” in all of your stats (way to train there, guy) and pretty much can’t even defeat a gnat in combat. You are floored by a gang of muggers in the street the first time you try to do anything, but a trainer just so happened to be witnessing your beating and offers to guide you. From there it is up to you to manage your time in such a way to foster gains.

This is where much of the struggle of this game comes in. You are tasked to find a balance between work, life-needs and fighting needs, oftentimes at the expense of one or another. Doing this action raises this, but lowers that. Doing that action raises that, but lowers this. Going to work gets you money but makes you miserable. When you are miserable you gain even fewer stats. Watching TV makes you happy but fatigued (while providing no gains). Doing pretty much anything makes you hungry, and once you’re hungry you can’t really do anything until you eat. Food costs money, so you had better go to work. Oh, did you do any training while you were doing all that? If not, you are probably going to see a significant loss in stats by the end of the day, because your stats are CONSTANTLY lowering themselves. Oftentimes you will get stuck in a loop of just trying to keep your meters filled that you completely forget to train. You cannot be a successful fighter if you do not train!

Well, you can’t be a successful fighter even if you do train, or at least not for a good long while. Starting out you are paper thin and made of balsa wood, a stiff breeze will blow you over. It will take a good few years of successful routine before you have the muscle mass to put a real dent in anything. That said, there will be fights, and you will most likely lose them. That’s just the path of the warrior I guess. Businesses you frequent will be robbed and you can try to defend them. Walking here and there runs the risk of being mugged and then trying to defend yourself. Delivering pizzas can sometimes lead you to the sewer to fight Teenage Mutant Ninja Alligators and so on and so forth. You will lose a majority of these fights, but that’s ok. The more you fight, the more experience you gain and the more moves and perks you can unlock which will give you more avenues to success. Hanging in there can be difficult at times though, because you are struggling and you are making an effort only to see the game throw all of that back at your face.

This ever-present difficulty means there is an EXTREME sense of satisfaction seeing one of your stat numbers tick up to the next digit (followed by a wave of anxiety as you scramble to prevent it from ticking back to where it was). So much so that any time you gain a stat, you feel ready to take on a wave of 300 Spartans. So how are the battles themselves waged? Well…They kind-of aren’t. You see, combat in this game is a numbers grind. You are at the mercy of percentages and chance. These almighty stat numbers are your driving force, you live and you die by them. Fights are broken up into rounds, at the start of which you can choose which abilities your fighter will have at their disposal for that round. You begin the game with a basic attack and a basic defensive maneuver, these of course will not take you very far and you will want to unlock more as soon as possible. Sanctioned fights have a limited number of rounds and whoever has the most health and/or is still standing at the end will be the winner. Street fights against thugs/etc. have however many rounds they need until somebody is on their back. When a round begins…You watch. You watch as your fighter takes hits and does things you don’t want him to do. You take notes of what works and what doesn’t work and you tweak accordingly. That’s pretty much it, just another level of management.

While it may seem like a bunch of work, Punch Club has charm, I’ll give it that. The game uses the familiar retro-inspired style that many indie games do, however it isn’t a “lazy” implementation of said style. The characters as well as the world they inhabit are excellently detailed. There’s skill in them there sprites. The world is also brimming with pop-culture nods and 80’s nostalgia, however in a slightly more subdued way than something like Saturday Morning RPG. The game doesn’t bash you over the head with these references. They’re just there, and if you get them, great! If not, great! What a wacky world eh? Go get beat up! The music is also retro chip-tune inspired, and I love it. It might get a bit repetitive, but these are still pretty good tunes to listen to while micro-managing some street-fights and downtime.

No amount of charm will completely mask the fact that the game is ruthless. The deck is constantly stacked against you, and the tiniest mistake will lead to failure. There is an intense learning curve to this game. The trial and error associated with creating a successful routine is addictive in its own way though. I was constantly frustrated, took a break, and then came back like “Ok, time to try THIS out!” I do feel like the game would have benefitted from a few more “bones” thrown to the player to ease the suffering while starting out. I get it, this is an “art imitating life” situation, but in the end games are supposed to be fun. If you can get past the growing pains of the early stages of the game, there is some rewarding fun to be had therein. I just feel it might be buried too far in for Mr. or Mrs. Casual gamer to get to. There is an easy mode you can play where your stats won’t degrade and you can just power up to super-hero levels, but the game sort of makes it a point to guilt you into feeling bad about choosing this option. In a way, I feel like that is the true game anyway. You want to grow up to be a hero for your father, so why not become a One-Punch Man level of unstoppable titan? Make dad proud!