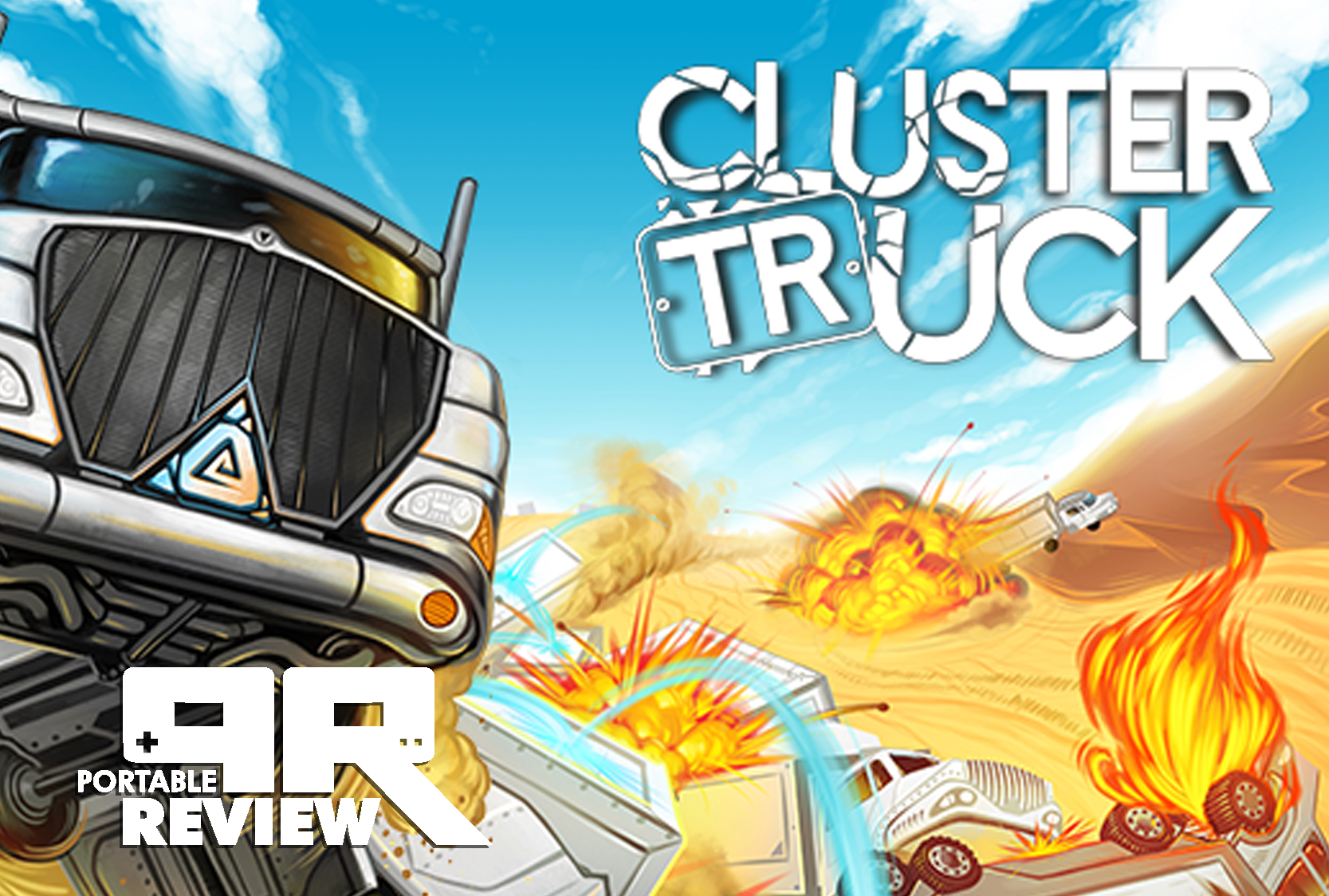 Clustertruck…Oh where to begin. I guess the name is a pretty accurate representation of what you’re going to get in this package. Using any sort of permutation of “cluster fuck” as your game title should be a red flag at this point. The joke has worn FAR too thin, but in this case, you actually are getting a cluster of trucks. So it works, and i’ll let it slide. Well, when I say works, I mean it works about as well as a concept like this realistically could work. The whole game takes place atop of a cluster…of semi trucks. Frantic semi-trucks with panicking spider monkeys driving them (Not really, but it feels like it. I hope I didn’t get all the spider monkey enthusiasts’ hopes up). Your job, as the player, is to hop from truck to truck and simply survive until you reach the goalposts of the level. Sound simple? In essence it is, but the concept is tested and eventually spread thin, like butter over too much bread.

The semi-trucks are, as mentioned before, ridiculously frantic and all seem to be trying to merge into one lane of a highway, without any regard for any of the other trucks. Sometimes this creates an easy to traverse great-wall of trucks. Other times? It creates a massive, towering dog pile of crashing semi-trucks that you have to either climb over or nimbly jump around. This may sound easy, but it really isnt. The ground (and any obstacle that isnt a truck) is pretty much hot lava, and if you touch it…Game Over. Of course you can retry a stage over and over so dying is pretty much inconsequential. But still, you will get frustrated on some levels trying to figure them out.

Luckily for the player, the better you do, the more style points you can accumulate. Then using these points you can buy upgrades to help you in your journey, such as double jumping or a jet pack. Getting air-time or doing tricks can help you score more points, and as such is something to strive for as you WILL want these power ups. The game, while simple in concept, does whatever it can to shake itself AND your comfort zone up. “Get from point A to point B in a straight line? Sooooo simple! What’s this? Change directions and leap onto a completely different lane of merging trucks? How do I do this?!?!” Is but a mere sample of the things the game will throw at you. That example might seem “simple” too but really, when accounting for momentum and the speed of the other trucks, you have to get the timing just right. You can and WILL be frustrated, but perseverance is key.

The controls are alright, I never really noticed any problem with them. The physics can be weird sometimes, as it’s a little hard to judge just how much momentum you have when trying to nail that perfect landing onto another semi-truck, but that’s Clustertruck! I think the game is really going for a more absurd vibe than anything. Look at these trucks…They are clustering! Try to survive! Sometimes, after failing a level multiple times, you just get frustrated and blaze through it as fast as you can, and then all of a sudden it just works. Then you think to yourself “Well what the hell was I doing the other 20 attempts?” Taking it slow, trying to be methodical. That is not how you Clustertruck.

The music is alright. It’s almost neither here nor there. But there was one time when I got up for a break after a long play session and noticed myself whistling the background music. However, now as I write this review, the tunes elude me. So at least on some level, the music has staying power, just not super long-term. But whatever, you’re here to Clustertruck. The music gets the job done. As for game longevity? You’ll be here a while, unless you’re some truck-parkour savant. Speaking of parkour, that’s a good way to describe this game. It’s like Mirror’s Edge…Except on top of a bunch of semi-trucks instead of the top of a city. There are many levels for you to fail multiple times at, and there are even a few holiday themed level packs included in the game.

So if Clustertrucking really is your thing, there might be enough here for you. Others, might end their truck jumping career early after enough times failing the dismount. Or splatting onto the side of a mountain. Or getting crushed under the very truck you were aiming for…Etc. If this trial-and-error infused, truck hopping absurdity is your jam, you’ll dig it. For others, the gimmick might not be enough to justify the purchase.