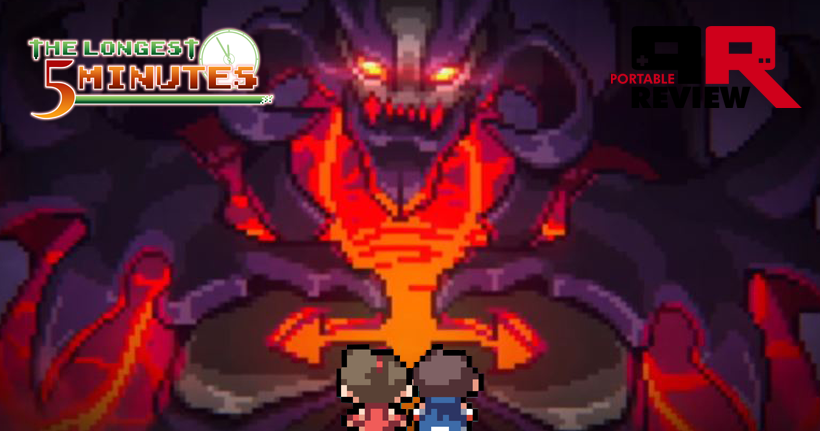 The Longest 5 Minutes should have just been a visual novel, full stop.

I guess I can expand on that thought. Let me start by what I feel the game sets out to do and build from there. The Longest 5 Minutes is a traditional JRPG told in such a way that you, the player, are experiencing memories of the main character who has lost his memory during the final fight with the game’s final boss, the Demon King. These memories take the form of micro dungeons and specific encounters. In each of these, the characters have a set starting level, gear, and money. Each of these memories have anywhere from 1 – 3 goals which you can see at any time in that memory. These sections usually end with some kind of boss fight where Flash, the main character, recovers that memory and uses it to further the fight against the Demon King.

I was really on board with the concept of this game, but in practice, there is absolutely zero reason to fight the myriad of random monster battles peppering each given area as you are given everything you need to beat the boss of that particular memory. That’s right; you don’t need to level up, buy gear, buy healing items, or do anything other than run from fights and beat the boss of that memory. In fact, the best item you can obtain is the item that keeps enemies from randomly encountering you. Later in the game, you are able to cast a spell that does the same thing, but it really makes me question why these battles and vendors were even put into the game in the first place. It feels like I’m playing an RPG if I turn a blind eye to the fact that none of the items and gear that I find in this memory will be gone in the next.

With that, the game’s focus comes down to the fight with the Demon King and the actual content of each memory, some of which are genuinely well written and moving. The sprites are simple, but quite good at times, too. I just couldn’t get over the fact that the game felt dated. Perhaps this is due to its uninspired, no-frills battle system, but I couldn’t shake that feeling the entire time playing the game. I also felt like it would have benefited greatly from better artwork or full cutscenes, perhaps making the game a visual novel entirely. At the end of the day, I wouldn’t have felt that I got my money’s worth had I paid the full price of $39.99.