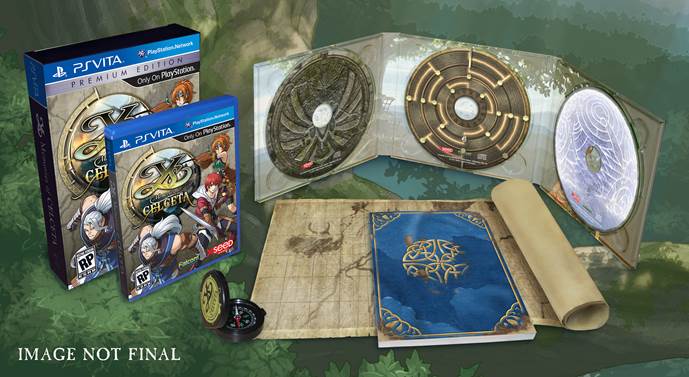 Celebrating over a quarter of a century of the timeless Ys series, the Ys: Memories of Celceta Silver Anniversary Edition will come packaged with a host of celebratory bonus items including a 3-CD collection of original and arranged music spanning the entire history of the franchise, as well as game-specific items such as a cloth map detailing the lands of Celceta, a logo-emblazoned compass, and‘Adol’s Travel Journal’ containing adventuring strategies and artwork, all within an exclusive commemorative package.  The Silver Anniversary Edition will carrya suggested retail price of $59.99, while the standard game will retail for $39.99.

Ys: Memories of Celceta is an extensive reimagining of Ys IV, one of the few titles in the acclaimed series never to have made its way to the West. For Ys: Memories of Celceta, famed Ys series creators Nihon Falcom have re-worked the game from the ground up, changing the framing of the story itself to create a more intriguing tale filled with mystery and distrust. Soon after red-haired series hero Adol Christin awakens on the outskirts of the Great Forest of Celceta with no memory of how he got there, he finds himself beginning a new journey with an unknown companion as they delve into the forest on a quest to explore its vast expanses, searching for clues to Adol’s identity along the way.

The Ys series has long been known for its fast-paced and acrobatic combat, and Ys: Memories of Celceta proudly continues this tradition on the PlayStation®Vita system, adding optional touchscreen functionality to create a handheld action RPG experience unlike any other. Through clever use of the PS Vita’s rear touch pad, players are able to issue commands to allied forces while simultaneously engaging enemies in combat; and for a better view of the action, the camera can be zoomed in or out at any time through use of the device’s front touchscreen, providing a tactical advantage in large-scale fights. More processing power means more enemies on screen, and with the largest, most non-linear overworld in Ys history, Ys: Memories of Celceta boasts asuperlative atmospheric experience, representing a thoroughly modern evolution of the high tempo gameplay that has made this series a timeless action RPG mainstay.